Eimear Noone Presents: "Conductrix: A View from the Podium," Virtual Reality & 3D Conducting Tutorials and Book


Read below for more information. 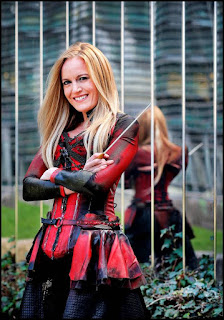 Eimear Noone Presents:
Muso-VR Phase 1
"Conductrix: "A View from the Podium"

A series of 3D and Virtual Reality Conducting Tutorials
with Accompanying Book.

Our plan for creating the entire video game is to attack each element in phases.  The first phase is to create a series of Virtual Reality and 3D conducting tutorials along with an accompanying book.  These will be called, "Eimear Noone Presents:  A View from the Podium."

About Eimear Noone, as Conducting Instructor:

For years, in between her concert appearances and recording sessions, Eimear Noone has been presenting conducting seminars for a wide variety of institutions such as Columbia College Chicago, The Society of Composer's and Lyricists, ASCAP, UCLA Extension, and many others.  Her private conducting students include, Grammy, Emmy, BAFTA, and Oscar Award Winners and/or Nominees.

Even though her recording and touring schedule no longer permits her to teach regularly, Ms. Noone still wants to be able to share her knowledge and experiences - the impetus behind both Muso-VR, and this first phase,  "Eimear Noone Presents:  A View from the Podium."

Through these, Maestro Noone wants to capture the content of the seminars and classes she has been presenting, preserve them, and share them with the world.

A View from the Podium will be the next best possibility to having private conducting lessons with Eimear.

Eimear's conducting philosophy and focus for the book and videos.

"I believe that conducting technique is a physical language with a vocabulary that anyone can learn. It's then up to you to use it to write a literature in your own voice."

I want this book and these virtual reality videos to be about the pure practicalities of conducting on the concert stage AND scoring stage; No maestro myth; no obfuscation; no false elitism; no pomp and circumstance."

The book and videos will be divided into sections such as:


About Eimear Noone:  A new breed of conductor.
Our Kickstarter was successful!  Join our Post Kickstarter!

Over the past ten years, Eimear Noone, in addition to being a respected classical conductor, has emerged as a premier conductor for film, multi-media, and video games music, both on the concert stage and in the recording studio.

In the studio, her conducting credits include some of video games most respected titles including, World of Warcraft, Diablo III, Starcraft II,  Overwatch, Hearthstone, The Legend of Zelda Skyward Sword, and many others.

YouTube views of Eimear conducting the recording sessions (in 3D) for Nintendo's 25th Anniversary of The Legend of Zelda, number in the millions.

On the concert stage, in addition to standard repertoire, conducting for the hit touring show "Video Games Live" and performing for other video game based concerts, Eimear has conducted music from The Legend of Zelda, Skyrim, Final Fantasy, Metal Gear Solid, World of Warcraft, Assassin's Creed, and many others; leading such venerable orchestras such as The Royal Philharmonic, The Sydney Symphony, The Philadelphia Orchestra, The National Symphony Orchestra, The Pittsburgh Symphony, The Skywalker Symphony and more.

She is also an award winning composer, her own music featured in games such as "World of Warcraft, Warlords of Draenor," and in feature films such as "The Donner Party," and "It's Dark Here."

Although best known for these contemporary performances, her background is solidly in classical music.  Recent concerts include her conducting works as varied as Scheherazade (Rimsky-Korsakov), The Firebird (Stravinsky), The New World Symphony (Dvorak), Rachmaninoff's Second Piano Concerto and more.

As another example of her work in the classical field, Eimear had the pleasure of conducting the orchestra for the Los Angeles Ballet in their inaugural production of Tchaikovsky's "The Nutcracker" in 2007. The LA Times said of the performance:

Eimear Noone has spent a lifetime developing her conducting style.  It is dedicated to being as clear and concise as possible without extraneous "noise" that might confuse the conductor's communication.
As was said by one observer of a concert performance: "A deaf person could have ‘heard’ the music by just watching her hands." Eimear elaborates, "Especially in the recording studio, there is no room for any possibility of being unclear - each minute is too valuable."
This relationship between her gestures and the music was honed over 8 years of masterclasses and private conducting instruction, most notably with two years of intensive study with the conductor of the National Symphony Orchestra of Ireland, Gerhard Markson.  Maestro Markson himself was the protégé of legendary Russian conductor Igor Markevich.
"I spent years looking for the right teacher" says Eimear, "that could help me create this style. The first time I saw Maestro Markson, I knew he was the perfect mentor."
Formally, Eimear is a graduate of Trinity College, Dublin, with degrees in composition and flute performance, with numerous certificates and additional studies including master classes at the Manhattan School of Music, The Royal College of Music, London, (through the Dublin Conservatory of Music and Drama), The Ennis IMRO Composition Summer School (youngest ever invited participant), The Victoria College of Music, London, Opera Ireland (conducting masterclass), and the ASCAP Film Scoring Workshop (to name a few). 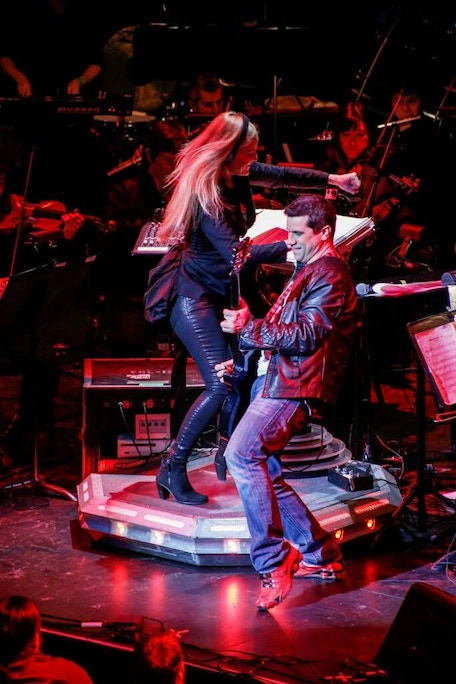 Just for fun, a series of videos showing Eimear Noone in action:
Eimear Noone's "Malach" from "World of Warcraft; Warlords of Draenor:"
This performance was at the 2015 Dublin International Game Music Festival with 130+ musicians on the stage synchronized with 128 videos submitted from a world-wide crowd orchestra.
BT's Electronic Opus - Conductor GoPro Cam:
A literal "View from the Podium." Eimear Noone wearing a GoPro during the recording of EDM legend BT's, "Electronic Opus."
One of the TANZ produced videos from Electronic Opus, Used with a huge thanks to TANZ, BT and Video Games Live creator, Tommy Tallarico.  More on the project here:  http://electronicopus.com
Blizzard Entertainment and Video Games Live at Gamescon, 2015:

Among Eimear Noone's many conducting credits is principle conductor for Blizzard Games including sessions for World of Warcraft, Diablo III, StarCraft II, Overwatch, and many more.  Here's Eimear Noone conducting a special "Blizzard" edition of "Video Games Live," with the legendary Tammy Tallarico.


“Eimear Noone is one of the most dynamic conductors I’ve ever known. She brings the music to life with her passion, her skill and her clarity. I have had the pleasure of seeing her teach and she is a true master! With Eimear, all of the mysteries of conducting are laid out one by one so that the student is able to apply it to their own approach. Technique, communication, preparation, problem solving are all broken down and explained. As with everything she does, Eimear brings her unique charm and positive spirit to the experience. She is a true Maestro!”

“Eimear is a stunningly vibrant performer, conductor and musical force.  This idea of empowering any end user to experience the thrill of helming an orchestra could not have a better champion. Anyone from student to master would have a pleathora of information to learn from one of the most fiery, seasoned and musical performers I’ve ever met. I can’t wait to try this!”

"Eimear is a tremendously talented and respected professional in the business. Her enthusiasm, charisma and confidence keep her in such demand both in live and studio recording settings. She is also a shining standout as an effective communicator with the orchestra as well as a wonderful educator and lecturer within her craft."

“Eimear is one of the great conductors, teachers, performers and composers.  Her energy is as infectious as her always bright outlook on life.  She's bright light in the world in the world Music, be it studio, stage or classroom.   Anyone would be lucky to learn from her wealth of knowledge and experience, both theoretical and real world”

"…In one movement the audience rose to its feet in standing ovation reminiscent of Riverdance.  It was magic, the response of he audience…  people left exhilarated and in tears."

"Muso-VR has great potential in a music education context in providing an interactive environment for students to explore and test their conducting skills in preparation for the live rehearsal.”

"Eimear runs sessions like an efficient general, but always engenders a calm and collegial atmosphere.  It's a team effort.  When she's running the show, I know we are in good hands."

"I have worked with Eimear on many recording and scoring projects. She is a fantastic conductor, and the musicians love playing for her. That makes my job easier."

"Eimear, is a profound musical genius, working with her opened up the musical capabilities within me that were frozen. She has an impeccable ear for composition and is by far one of the most versatile arrangers I know. "

Our Kickstarter was successful!

Posted by Craig Stuart Garfinkle at 5:06 AM

Get your digital copy and bonus material