Every now and again, angels enter our lives.  February 5, 2005, we lost the angel Jack Segal at the young age of 86.  He was writing songs up until the very end. 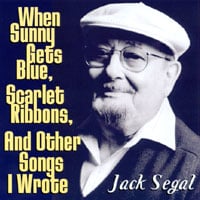 A throw-back to the classic songwriting days of the 40's, 50's and 60's, I had the good fortune of producing most of Jack's music for the last 15 years of his life.

From his earlier years as a tin pan alley songwriter of the late 40's and into the 2000's, his classics have been covered by everyone from Frank Sinatra, Nat Cole and Tony Bennet, to more recently Barbara Streisand, Al Jereau and Snead O'Connor.

Jack also spent decades as a songwriting coach, holding continuous salons and seminars.  Although I was never his "student," he was in every way, shape and form, my teacher.  I just got to be the fly on the wall, running the gear as the young tech guy during these lectures, and often I would be asked to critique the songs and productions as well.

In an effort of full disclosure:  When I first started working with Jack, I never considered myself a lyricist and when it came to my favorite performances of the classic songs, I barely took notice of the lyric, preferring to listen to the instrumental versions.

I think Jack cured me of this "malady" in the first week of our working together.

The Numbers Game:  The Wit and Wisdom


In one of our first meetings, Jack proudly stated:


"In my life as a songwriter, I've written thousands of songs.  Out of those three or four thousand, four are perfect.  I'd rewrite all the rest.  The key to writing great songs is to write a lot of them!"

I translate this to one of my favorite phrases:  "No Song (or work of art) is ever finished, only abandoned."

Jack's songs and his rules might seem a bit archaic when you apply them to the latest Billboard chart topper, but when you look deeper at the contemporary songs that have real meaning to people, I think you'll find them as valid today as ever.  They are:


1.  There's a simple and universal story (or concept) that states a desire, and through the singing of song, the narrator is transformed in their desire.

2.  All the rhymes are true - but not always easily predicted.  No words are rhymed with themselves!

3.  There is a perfect balance between repetition of words, novelty, and familiarity in the words and phrases, that is, as soon as the listener thinks they know the pattern, it changes ever so slightly to keep the interest.

4.  The melody and the tension and release of the harmony match the meaning of the lyric in position and intensity.

With these four rules in mind, I invite you to explore the four perfect songs below.

When Joanna Loved Me

But, even in December, I remember
Her touch, her smile, and for a little while
She loves me
And once again it's Paris
Paris on a Sunday
And the month is May

Pitter patter, pitter patter
Love has gone so what can matter
No sweet lover man comes to call

People used to love to
Hear her laugh, see her smile
That's how Sunny got her name

Hurry, new love, hurry here
To kiss away each lonely tear
And hold her near when Sunny gets blue

Hold her near, when Sunny gets blue

Should I have had more time to spare for you
Should have been there for you, to care for you

What would it have taken if only could have taken
My eyes off me for a while
I’d have seen the hurtin hidin,
Just behind the curtain of your smile

Oh, I swear I didn't know, which goes to show
How long it takes a man to be a man

Have more time to spare for you
Always be there for you, to care for you

Epilogue, Craig Tries to Write a Lyric:  A Nuclear Disaster


A number of years ago I was hired to write a "classic song" for the video game, "Fallout, A Brotherhood of Steel."  In the game, the song plays through a post apocalyptic, 40's era burned out radio.

At this point in my career, even though I had written countless songs (Hasbro, The Little Mermaid Series, et all), I had never attempted to write the lyrics.  I always partnered with a dedicated lyricist.

But times and budgets were tight, and in speaking with the audio director from the company, the concept for the lyric was clear and came to me quickly.  I decided to go for it.  Channelling my best Jack Segal, I painstakingly applied all I had soaked up at his feet.

Perhaps it's foolhardy to put my lyric on the same page with Jack's, but in reading mine below, I trust you can see how all I am doing is paying tribute to the master.  Not bad for a first attempt.

A lonely Electron, with nothing to do,
Pairs up with a Neutron for a cocktail or two

Atomic kisses, survived by a few, they had a...

Said the Electron to the Neutron, you sure can be dense
With this much attraction there's no Civil Defense

Let go of that energy, no need to be tense
Give me that...

Einstein said that space is elastic
Twist his theory, it comes out bombastic

A mushroom cloud, a sight fantastic

Stick your head between your legs, kiss your ass goodbye

A happy Electron, a Neutron its mate
Don't give a damn about apocalyptic fate

Posted by Craig Stuart Garfinkle at 7:55 AM