Last month the people at Native Instrument asked me to test drive one of their new libraries, "Kinetic Metal."  I had a blast with it!  The library is based on sounds created from banging and scraping things that are metal, processed by a brilliant audio engine.

I really enjoy discovering the motion and emotion inside a library – especially when automating the controller parameters.  It was with this motivation that I attacked the composition, “Empty in Space."

With this in mind, the piece started with my going through the different sounds in the library, hearing what harmonic and melodic motion existed inside the patches themselves, especially when playing with the modulation wheel.

Finally, just as an experiment, I turned on the "motion control" (one of the libraries features) and heard how a higher metallic tone of a 7th would oscillate at a regular interval.  It was from this combination of the overtones series, the prominent major third, and the oscillating 7th, that influenced the creation of the piano melody.

Here’s the piano roll for "Oil Barrel  Drums" (doesn’t look like much, but sounds great!): 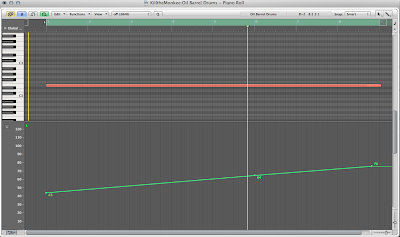 The patch “Blacksmith" was my next addition.   Again, moving with the mod wheel while playing the lower notes, I discovered some wonderfully warm sub-sonic tones that played against some random upper partials.  The combination added a nice counter motion to both the melody in the piano  and the motion from "Oil Barrel Drums."  Likewise, I found that a more angular motion in the mod wheel really brought out the random overtones.

For the bridge portion of the cue, I first wrote the chord changes on the piano.  I then went searching for a "Kinetic Metal" patch that could play the tones of the chords, but had an internal motion to make them more interesting.  I discovered “Rusty Wires,” especially at the lowest level of the modulation wheel, presented the tones of the chords with a rhythm reminiscent of a ball bouncing, where the repetitions get faster over the distance of a bar and then start over again at the next note’s attack.  This was exactly what I was looking for.

Only after I had this accompaniment for the bridge did I go back to writing the piano melody – drawing directly from the melody at the beginning and simply adapting it to the new chord changes.

When working with such great ambient patches filled with internal motion,  I often find that bringing out the real brilliance of the sounds means using surgical volume automation to bring out the part when it does something really special.  As one can see in the screenshot below, there is rarely a moment when there is not some type of automation being used to execute this.  The screen shot also presents the full pallet for sounds that I used. 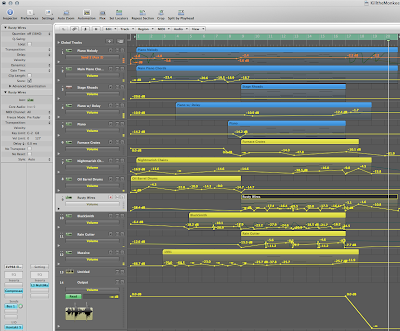 It’s my pleasure to share this all with you.  Here's the actual Demo:

And here's where you can learn more about the library:

Get Native Instruments Complete Ultimate:  One of my most valuable tools!

Posted by Craig Stuart Garfinkle at 9:06 AM No comments: