Eimear Noone - "World of WarCraft," "Warlords of Draenor" Favorites

This is a delicate blog to write, fraught with danger at every turn of phrase.

That's what it's like when you are married to a powerful musical sorceress.  I swear, when she is conducting an orchestra, while cueing the brass, I can see the fireballs as they explode from her fingers. 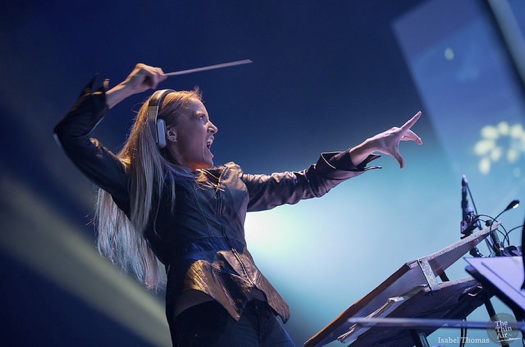 Yes, in addition to being her husband, I am also her biggest unabashed fan… if you did not notice already.  I am so thrilled to be posting this!

As those who follow either of our blogs will know, since January, both Eimear and I have been composing for Blizzard as they prepare "Warlords of Draenor," the next expansion of their mega-hit franchise, "Word of WarCraft."

We are beyond thrilled to be a part of a creative team that is so dedicated to great music, art and storytelling.

Many of you also know that Eimear has been conducting the orchestra in recording sessions for Blizzard for ages, but this is the first time "World of WarCraft" has included her own music.  It is simply stunning!

The game doesn't come out until November so we can't share the official versions of the music, but I just put together a YouTube playlist of Eimear's music based on fan postings.  Click on the link below to access the playlist of her favorites.

Like Eimear's Music?  Join our mailing list us through the box at the very top right, and we will send you a free MP3, a bonus track from her mini EP, Hibernian! 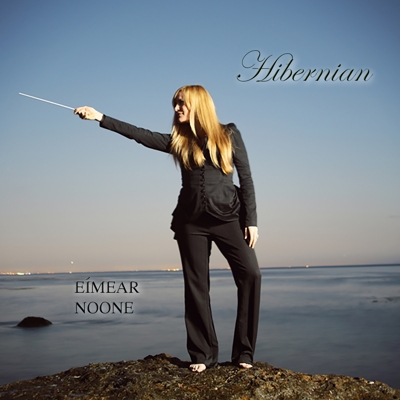 Dane Cook, The Evolution of Suicide


Throwback Thursday: Back in 2005 I embarked on a journey collaborating with Dane Cook, and by 2008 my role had evolved to the point where I was directing, producing, editing, and creating music for his projects.

One of the highlights of this experience was the feature documentary I directed entitled, "30 Premeditated Acts." I am especially proud of this segment, "The Evolution of Suicide," where Dane copes with a friend's suicide in the only way he knows how - through comedy.

The segment is at the same time funny, poignant, troubling, and full of heart - and definitely  not safe for work!!!!

Posted by Craig Stuart Garfinkle at 9:31 AM No comments:

World of WarCraft: Warlords of Draenor - An Epic Scoring Quest!

Since January 2014, I've had the amazing privilege of being a part of the composition team for the upcoming World of WarCraft expansion, "Warlords of Draenor."

The rest of the composition team includes some of my favorite humans including, Jason Hayes, Sam Cardon, Clint Bajakian, Derek Duke, Neal Acree, my wife Eimear Noone, and of course our intrepid fearless leader Russell Brower.

If they are really humans, that is…  One never can tell in the World of WarCraft.

This sounds like a large team, but this doesn't even begin to touch on the countless singers, musicians, orchestrators, copyists and support staff needed to produce so much music at such a high level of production.

It's an absolute dream!

Now that the music has started to hit the internet, I can finally answer all of you who have been following my career and have asked to hear it.   With this in mind I created this playlist of my favorites that I composed for the game.  I'll add to it as more of the music hits the internet.

Thanks again to all of you who have reached out to me!

My Warlords of Draenor Compositions - Craig Stuart Garfinkle, Some Fave's

Buy the Warlords of Draenor Score on iTunes:

And of course, click here if you want to get the "Warlords of Draenor Collector's Edition"

Are you a Video Game Music fan?  Join our mailing list us through the box at the very top right, and we will send you a free MP3, a bonus track from my score to "Baldur's Gate, The Dark Alliance II."

Next Up:  A playlist of the music written by Eimear.
Posted by Craig Stuart Garfinkle at 12:59 PM 4 comments:

My Experience with "Broadjam" - Is it worth it?

Many of my fellow musicians and students may be considering joining websites like Broadjam as they seem to offer good opportunities for composers, especially one's without access to "The Industry."

Once on Broadjam's list, one gets regular emails with subjects such as:  "Last Chance for $15,000 Piano Licensing Opportunity."  "$30,000 Deadline for Positive and Bright Tracks!"  This sounds great!

I won't answer the question of "is it worth it," but instead I offer the empirical data of my experience with the website.

As my experiment was from 2011, I will offer the current rates for participating in any of these contests or working with Broadjam:

As I was teaching a film scoring class for UCLA continuing studies at the time, back in 2011 I decided to try using the website to market my music - to evaluate the website's value for composers just staring out.

I also committed myself, for three months, to competing in any contest where my music was appropriate.  I signed up for a year membership and for the period of three months, I was making submissions about four or five times per week or more.

But my submissions, mostly at $5 a piece, were not without qualification.  There were certain contests I would not participate in.

For example, if you read the complete email for the two contest above offering $15,000 and $30,000 for the winner, these also says that the purse is "to be split with the publisher."

I would never submit for these as my understanding is that if you win these contests, not only do you split the purse, a publisher would then take your publishing to the piece in question.  This did not feel right to me as my publishing and the ability to submit my pieces in multiple places at once is vital to my business.  Therefore, I would only submit to contests where there was no middle man between myself and the client.

After submitting a piece, what would happen then?

When I would sign into my Broadjam account, I would be able to view a timeline of contest.   It would tell me things like, "On Thursday, June 9th 2011, the provider played 192 song(s).  Your  song, "Priceless Moments" was played.

Likewise, you could participate in a "Peer Review" process where fellow musicians could vote on your piece and how appropriate it would be for the project described.  The song would then be tagged with a peer rating.

For a neophyte composer, having a peer review would be of interest.  Knowing where you stand against professionals is good to know.

However, and there is no way to say this without sounding egotistical - but it needs to be said:

As an Emmy nominated composer with 20+ years of experience, I would hope that my music would be favorably reviewed.  And I did indeed find this the case.  I was always in the top 5%.  Often I would see messages in the timeline saying my music was downloaded by the provider and under consideration.

But let's look at the empirical data:

By comparison, the odds of winning at roulette, when betting on black, are 47.37%.

Still, a was committed to trying.  One win would more than wipe out what I was spending.

And then it happened.  After 30 or so submissions, I finally saw on my timeline:

The Provider of this Opportunity has selected 1 of your songs, and will be contacting you. Please make sure your contact information is accurately filled out in your Broadjam account.
Please contact Broadjam Customer Service for this Provider's contact information if needed.
Please note: Broadjam is not a party to any contracts you sign with Opportunity Providers.
Here's a sceenshot from my timeline confirming my win: 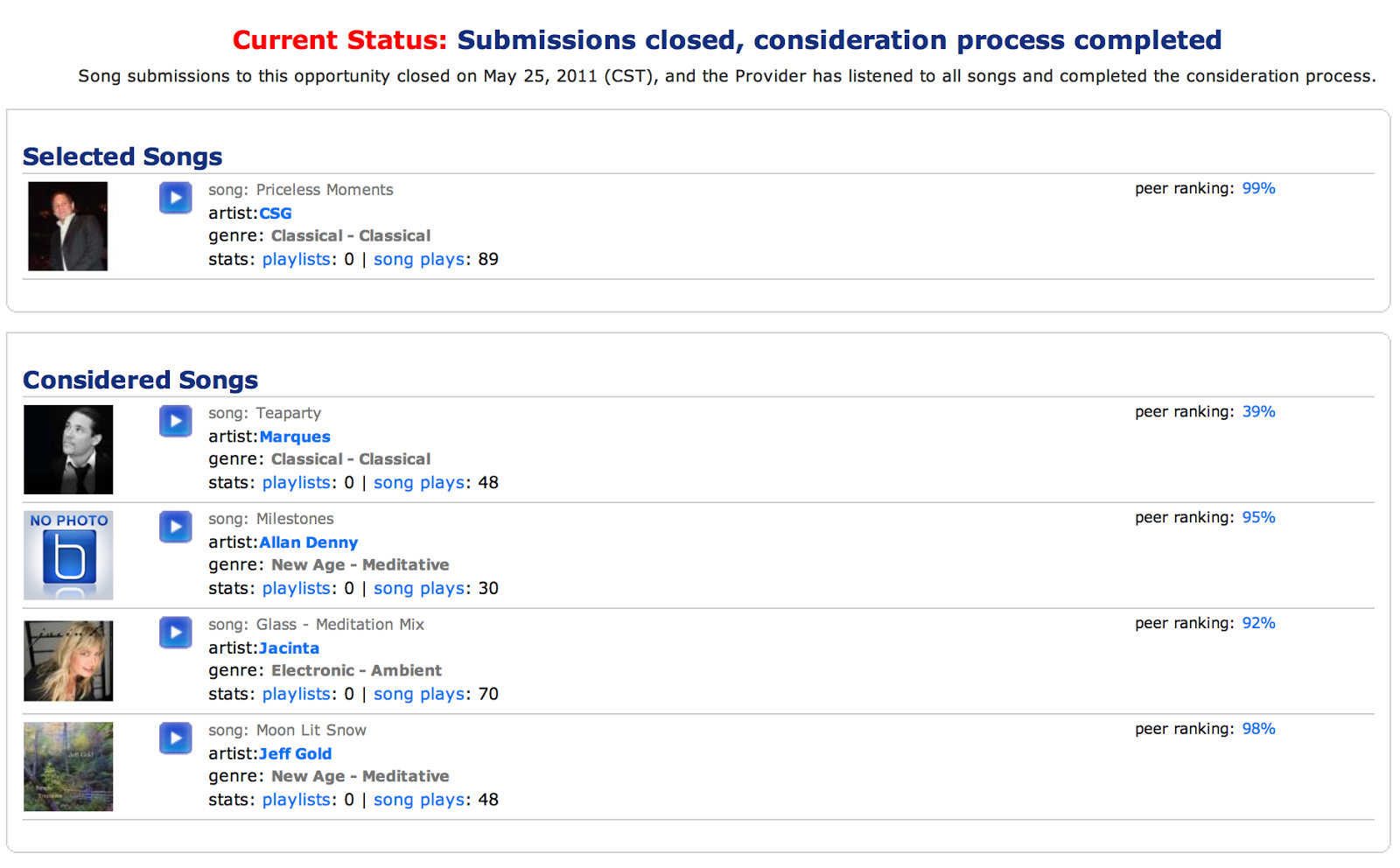 A few days later I did indeed get an email from "The Provider."  I responded that I was thrilled they liked the piece and asked what the next step was to finalizing the license.

There were no further contacts from Broadjam nor "The Provider," and I never received my prize.  Multiple emails to "The Provider" were never answered.

Thus ended my experiment with Broadjam.  If you have had an experience with Broadjam, I invite you to share it in the comments below.

Email ThisBlogThis!Share to TwitterShare to FacebookShare to Pinterest
Labels: Broadjam, Is Broadjam a Scam? My experience with Broadjam., Is it worth it?
Newer Posts Older Posts Home
Subscribe to: Posts (Atom)