Malach Angel Messenger, from Warlords of Draenor, the Full Story

"Malach, Angel Messenger"
from "World of Warcraft, Warlords of Draenor"
by Eimear Noone 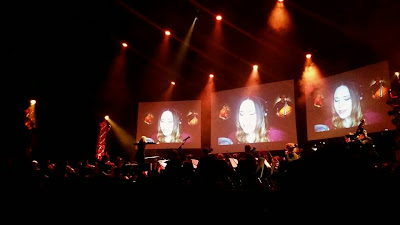 Today is May 16th, 2015 and I have just finished uploading the final video for our crowd created version of "Malach, Angel Messenger," from "World of Warcraft, Warlords of Draenor."  It's been quite a journey.

Back in October of 2014, Eímear and I embarked on a journey which became the first Dublin International Game Music Festival (iDIG Music Fest).  As part of that project, we decided to include in our headlining Video Games Live show, a specially performed composition, one in which musicians from all over the world could participate.

We chose Eimear's "Malach, Angel Messenger."  I'll let Eímear tell her own story of how and why she originally composed the composition.  For me, it's simply one of my favorite pieces of music - regardless of the special place it holds in my heart.

For the next six months I sent out countless copies of guide tracks and individual parts to musician's all over the world, cajoling them into videotaping themselves performing their individual part while listening to the guide track.  I eventually received 128 different files from over 40 musicians (many sending multiple videos).

To those friends who did not get around to performing this time, I forgive you!  The piece is an absolute tour de force and I know how hard creating a video is.  Just make it up to me next year!

On March 4th, with our April 4th concert looming, I started the process of cataloging, synchronizing, remixing and editing all the parts I received.  Working around the clock for three weeks, I finally got through the first minute and a half when I realized at this pace, and with all my other responsibilities I had for the iDIG Music Fest, I was not going to make the concert without help.  I was lucky that my friend Russell Cooley joined in the process and the first incarnation of the video was ready by the concert.

Post concert, after giving myself a week to recover, I eventually opened up the edit file with my goal of creating the final version for release.  Creating the final mix and edit was truly an emotional and exhausting journey.  I was also frustrated that I didn't have more video from the audience perspective during the live performance that showed the size and scope of the orchestra.   Still, I am so proud to finally present the result to the world.

from:
World of Warcraft; Warlords of Draenor

And a World-Wide Crowd Orchestra

orchestrated by
Eimear Noone and Bill Liston

written for and dedicated to:
Aaron Padraic Noone Garfinkle

Russell Brower, Jay Maguire and our brilliant colleagues at Blizzard Entertainment
Tommy Tallarico and the Video Games Live crew
Roma Downey - for your inspiration
Carol-Ann McKenna, Gearoid Grant, and the staff and musicians of  The National Youth Orchestra of Ireland
Paddy Duffy, Chris Rooke and the staff of the iDIG Music Fest
Emer Relihan, Edel Malone, Conor O’Connor and the brilliant team at Convention Centre Dublin
Malukah, you're simply a legend
Chris Bleth, duduk master
Frank McNamara, Theresa Lowe and JJ McNamara for your constant support and encouragement Malukah, you're simply a legend
Chris Bleth, duduk master
Brighid McCaul and our friends at "The Herald"

The team at Spin 103.8 FM, Kathryn Ryan, Clara McGinley, and Jamie Crawford
Eamonn Noone - for your rockin' percussion parts
Russell Cooley for saving the day with your last minute iDIG Music Fest help
To our global YouTube orchestra members - you gave your time and talent with such good hearts
Rabbi Judith HaLevy for your wisdom and guidance
Mary None, for being there when we really needed you...

written for and dedicated to:
Aaron Padraic Noone Garfinkle
April 12th, 2012
Posted by Craig Stuart Garfinkle at 2:18 PM 2 comments: