In my UCLA and other classes, my students are responsible for creating their own click tracks and midi maps for their recording sessions.  All our recording sessions are recorded into protools, regardless of what program the student uses to write the music (often Logic Pro).

With this in mind, I have a very specific way that I have students prepare the elements so it is easy for our engineer to import these into the master template for the session.  This is focussed on quickly being able to get through 15 students in one three to four hour recording session.  A brief explanation follows:

Here's a direct link to the wave file.  It will be the source of your click track.

Even though your protools session will have a midi map that matches the click, and you may be used to using the internal midi click all through your composition process, the mechanics of creating the click in real time, while recording a symphony orchestra, is simply not reliable enough to risk studio time over.  This is why we always use an audio click when recording.  An audio click is bullet proof!

Step One.  Export the midi map from your sequencer:

In Logic Pro this is simple enough:

Create a dummy midi track that runs the entire length of the piece - one that is not broken up into regions.

Then, after selecting just that midi track, export the selection as a midi file from the "file menu."

Side Note:  As an alternative, any of the midi tracks, consolidated from beginning to end, can work as the tempo map, likewise, an entire midi export of all tracks, but for the sake of simplicity of the class, a singe dummy track will do.

The click track is created by manually dragging the "Urei" sample above onto the predetermined grid of an audio track (quarter note, eighth note, etc.) and repeating the click for the duration of the cue.  Usually, this is a process of creating a single bar of clicks and duplicating it for the length of the piece.

Make sure to cut off the click immediately after the last note of the orchestra so that it doesn't bleed into the recording during the ring-out.

Next, bounce the click track to the exact duration of the midi region to make one single audio file of the click.

Now, when the engineer imports the audio click and the midi map into the protools session, everything should match up perfectly with all tempo and meter changes intact, no matter how complicated.

Here are some general questions I am often asked about this process:

Studio musicians have been using the Urei click for decades.  In the old days, this click would have been generated live by a click box called "The Urei," hence its name.  It is the sound they are used to hearing, and because of it's sharp, penetrating nature, it is the easiest to follow.

The click above is one that I personally edited to have the sharpest attack and the quickest possible release.  Other Urei clicks that exist have too much sustain and when played at a high volume, the release of the note can be mistaken as a new attack and can obfuscate the beat.

Experienced studio musicians do not want an accented click.  The main reason is that when the music in the room gets loud, often the unaccented clicks disappear into the room noise.  All the musicians will hear are the accented downbeats and their performance will drift.

How many "free" or "preparatory" clicks should there be?

The number of free clicks is a function of two elements:  The meter of the first bar, and the tempo of the piece.  Here are my general guidelines:

Can we use tempo changes and rubato clicks?

I am a big fan of roving clicks and tempo changes and have had lot's of success using them in the studio - but I say this with tremendous caution.  Be prepared that if you have a tempo change or roving click, it will take more time, and in a class where so many students have to record, often it isn't practical.


Always bring a copy of your click tracks and pre-records to every session, even if you have uploaded the files to a server.  Files can get corrupted or lost.  S*#T happens.  As a wise friend once said, "He who laughs last, usually has a back-up."


If you have a pre-record, always confirm that the click and pre-record play in sync... before getting to the studio!  This is easy enough - just pull them into your master session or create a new one. You'd be amazed how many times my students have not done this and discovered to their horror things were not as intended.

Consider:  Audio files are accurate to one 48,000th of a second (at 48K).  SMPTE is accurate to at most, one 30th of a second.  Therefore, your SMPTE start point is by definition, an approximation of real time.  Consider what might happen if the start of your click approximates to the earlier frame and your pre-record approximates to the later frame?  When this happens, your click and pre-record will be 30 ms off - which is an audible flam.


General Rules for Conducting in Class

For example, after readying the orchestra, the conductor will hear the first click.  The conductor will then say aloud, "Two, Three, ..." and then leave the last counts before the downbeat silenced.  The main concern, especially in a studio with a great deal of natural ambience, is that the last counts could still be echoing in the room when the music starts and thus the count-off will be heard on the recording.

The conductor should always stay still, in "ready position" until the upbeat just before the downbeat.  Be aware that if the conductor moves too soon, there is always the danger of a player misunderstanding the motion and starting too early.  By staying still until the upbeat, there is less of a chance of the players misreading the intention and coming in wrong.

Posted by Craig Stuart Garfinkle at 12:13 PM No comments:


Every day I am going to share a new composition, this is one of my favorites!


A traditional huge Gothic orchestra and choir composition, originally commissioned by The Ant Farm for the SPIDER-MAN III trailer.  This piece has since been used extensively on BRITAIN'S GOT TALENT and AMERICA'S GOT TALENT, and most recently on the trailer for the film, BURIED (written with Simone Benyacar).
Posted by Craig Stuart Garfinkle at 1:51 PM No comments:

2011 UCLA Extension Instructor of the Year

I have always loved teaching, but you can not imagine my surprise when I received this honor.  I guess when you are doing things that make you truly happy, sometimes people notice.

Thanks to all the students who have endured my lectures - which start again with "Film Scoring III," tomorrow night.  I am looking forward to it!

Posted by Craig Stuart Garfinkle at 11:10 AM No comments:

A Real Orchestra Makes All the Difference - A Side by Side Comparison.

I was always disappointed with my score from the game Baldur's Gate, the Dark Alliance II because Interplay Entertainment went Bankrupt while I was working on the project and defaulted on their end of our agreement.  What I had hoped to be a grand orchestral was limited to what I could do with my samples.  Having a live orchestra is always better!


Recently, I had the opportunity to re-record this cue with a small ensemble.  Having those brilliant players makes all the difference.  Here's the original for comparison:


Enjoy!  Let me know what you think.
Posted by Craig Stuart Garfinkle at 10:30 AM 2 comments: 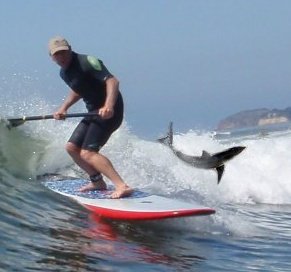 What is it like to be a professional hyphenate?

It makes for odd conversations:

“That’s kind of difficult to say, really. What day are you asking about?”

“I know it seems simple, but if I am really going to be honest in my answer, I have to consider the  temporal nature of your...”

“...the temporal nature? Listen, if we are going to fill out your unemployment form correctly, I just need to  know, what was your last job description? It’s a simple question.”

“One would think, wouldn’t they?"

I guess the best way to describe myself is with this video:  It's a song I wrote and produced entitled, "The Best Things in Life Set You Free."  It features my friend Eric Enzo on Lead vocal.  It features video I shot last summer with my Go Pro HD camera.

The hook to the song came to me while I was surfing in Malibu with my friends so it's only natural that I used my surfing video to illustrate the song.  I feel it sums up a great deal about who I am and what I want out of life.

Welcome to my blog - I hope to keep you entertained as I negotiate all my different creative endeavors, all of which will be shared here.   Welcome!