A number of years ago, I created the score for the trailer to the film, "All Good Things," one of over 160 I have created in my career.  These have ranged from two "Harry Potter" films to "Vicky Cristina Barcelona," to "JJ Abrams Star Trek."

I just saw this trailer had 4.5 million views!  I had no idea it was so popular...

When I went through the comments about the trailer, I was amazed to see that a great number of people were asking about the music from the trailer - it's hilarious what some people thought was the source!

So, I decided to step out from behind the curtain and post a new edit of just the music from the trailer.  Let me know what you think!

Buy the movie on iTunes

Posted by Craig Stuart Garfinkle at 11:44 AM No comments:

Eímear Noone, Conductor and Composer, releases her first "Mini EP."

Although best known as an orchestral conductor, her work on "The Legend of Zelda, Symphony of the Goddesses," and as the conductor for Blizzard Games (Diablo III, Starcraft II et all.) after years of urging her to share more of her music with the world, I was finally able to convince her to release an EP containing just a handful of her compositions.

We have called the CD, "Eímear Noone, Hibernian," as an homage to her Irish roots.

You can purchase the CD here.

The first is"Flying."  Composed and conducted when Eímear was still in her early Twenties, it remains to this day, one of my favorite compositions.

The second is an excerpt from the silent film, "Ireland, a Nation" (1914), which features Eímear's contemporary original score.

Eimear's version of the score was commissioned for, and first premiered at "The Los Angeles Irish Film Festival," using a live ensemble performing to the movie.

You can preview the rest of the CD and purchase it CD here. 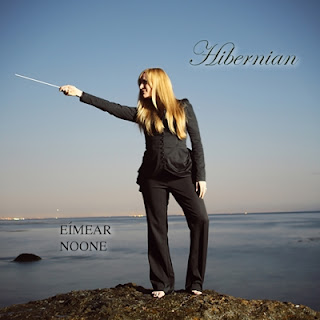 Posted by Craig Stuart Garfinkle at 3:10 PM No comments: