Eimear and I, and some dear friends, at the opening of my brother's show, "Ghost, the Musical" at the Pantages. It's a beautiful show, written by the insightful Bruce Joel Rubin (who also wrote the screenplay to the movie).  We had the pleasure of dining with he and his wife Blanch before the performance.
Only took my brother David Garfinkle half a decade or so to get the show to the stage! 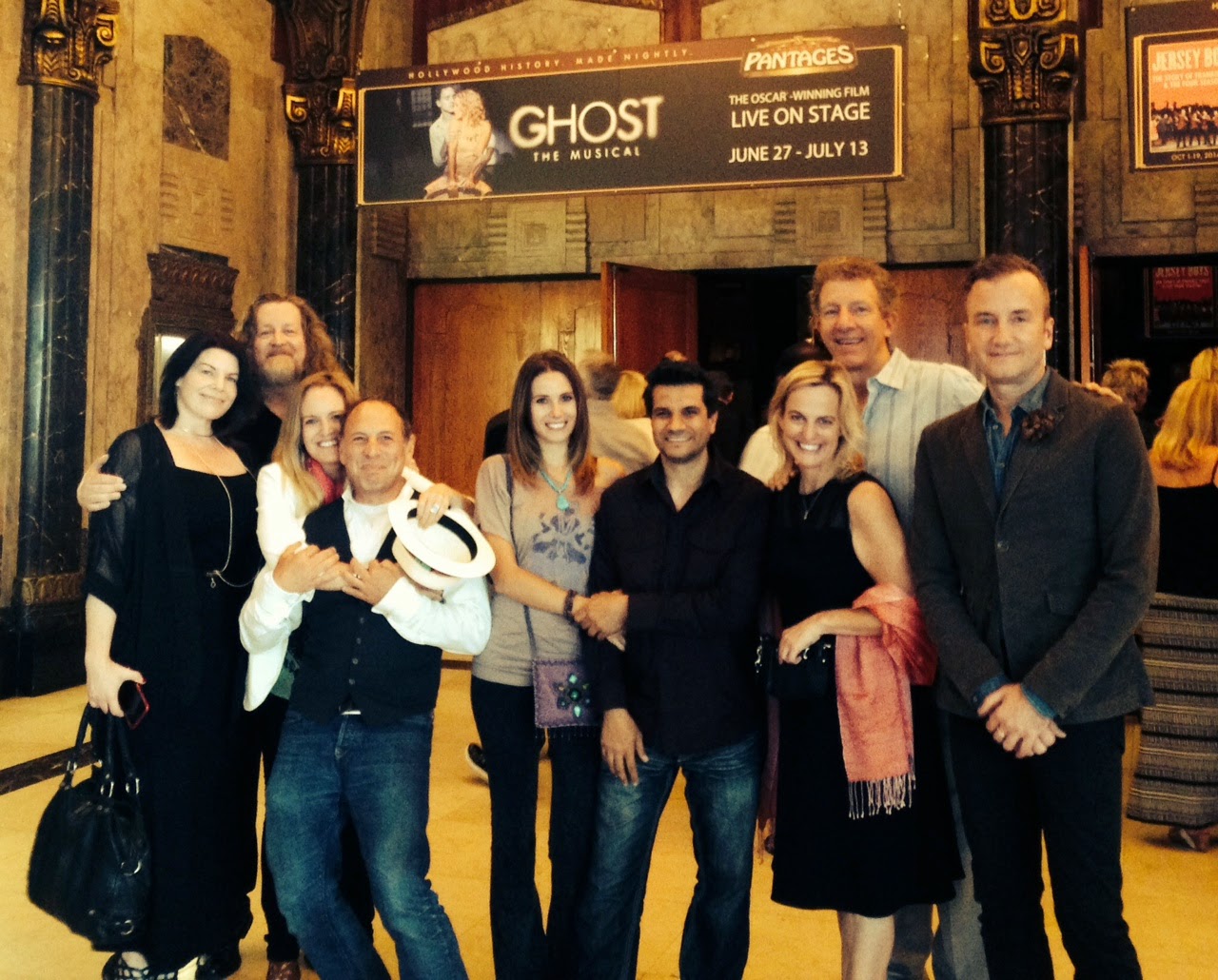 At dinner, Bruce told the story of how when he was first approached by David, he was not sure how, or even if, "Ghost" should be adapted for the stage as a musical.

Bruce then generously told the tale of how David came to his house and proceeded to go through the movie scene by scene, explaining how and where each song would go.  Lost in conversation, the time got late, and David missed the last train back to New York.

There was an argument at dinner as to whether missing the train was an artful ploy to continue the conversation, or an innocent over-site, but now missing the train has become Broadway legend - so I'll let you all decide the truth.

Just like Sam in the story, I picture David singing "1000 Bottles of Beer on the Wall" all night until Bruce simply gave in.

The show is in Los Angeles for the next few weeks, but is touring the country.  Catch it when it's in your town.

Posted by Craig Stuart Garfinkle at 11:37 AM No comments:

I had a wonderful time moderating an evening with The Society of Composer and Lyricists, celbrating composers Sean Callery and Daniel Licht.  Here are some pictures from the event.

A big thank you to Laura Dunn and Jana Davidoff of CW3PR for their help. 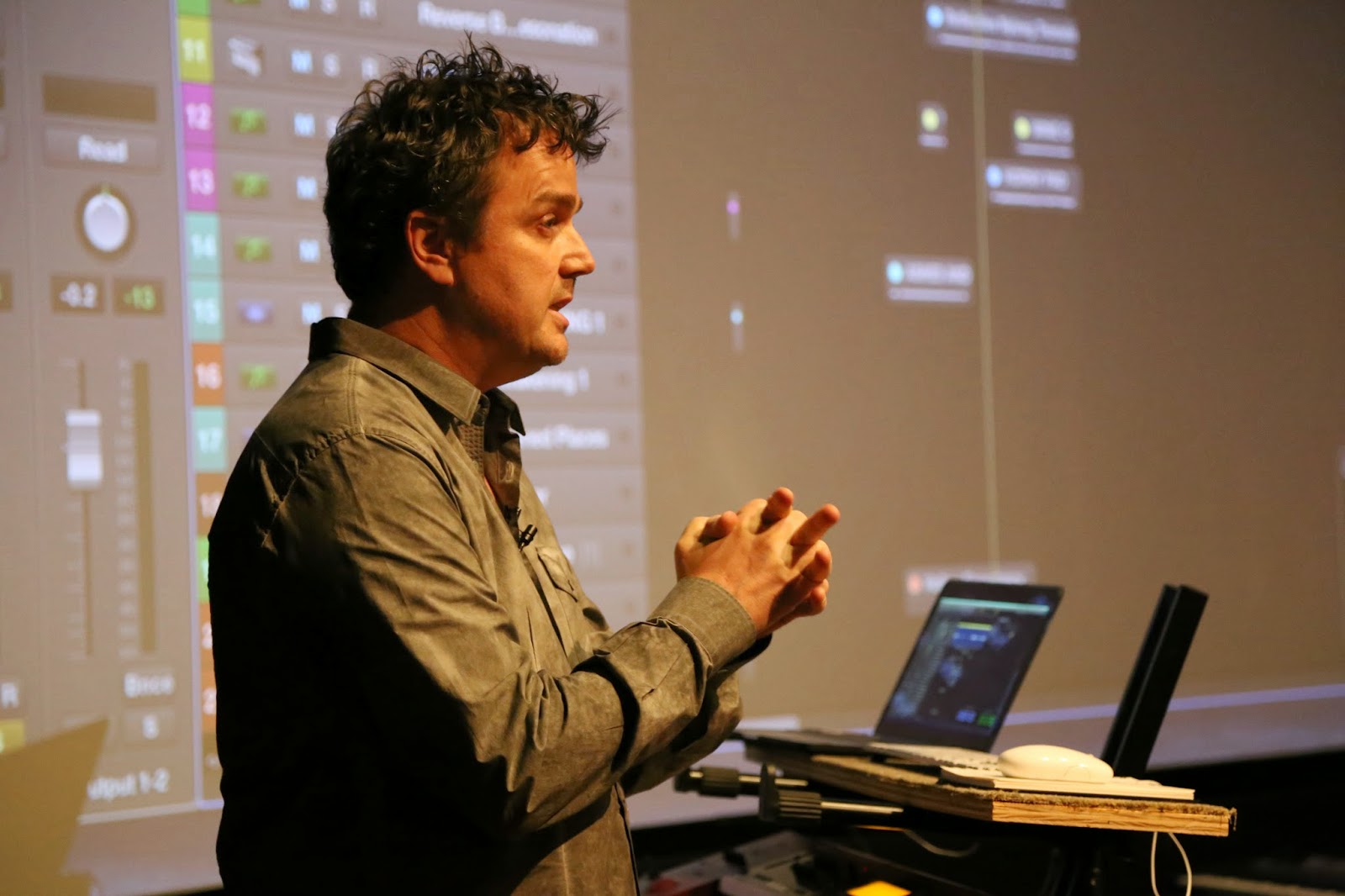 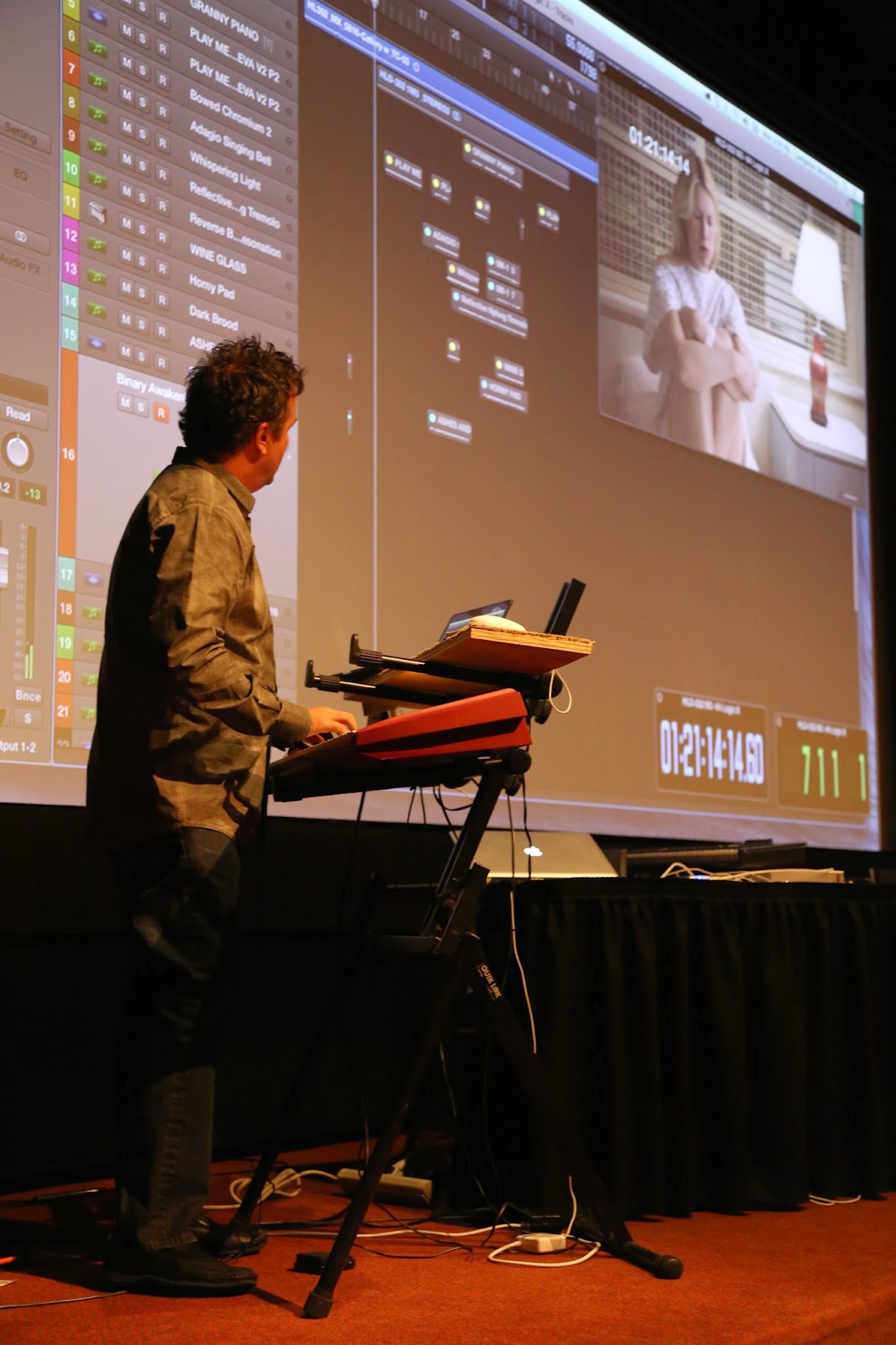 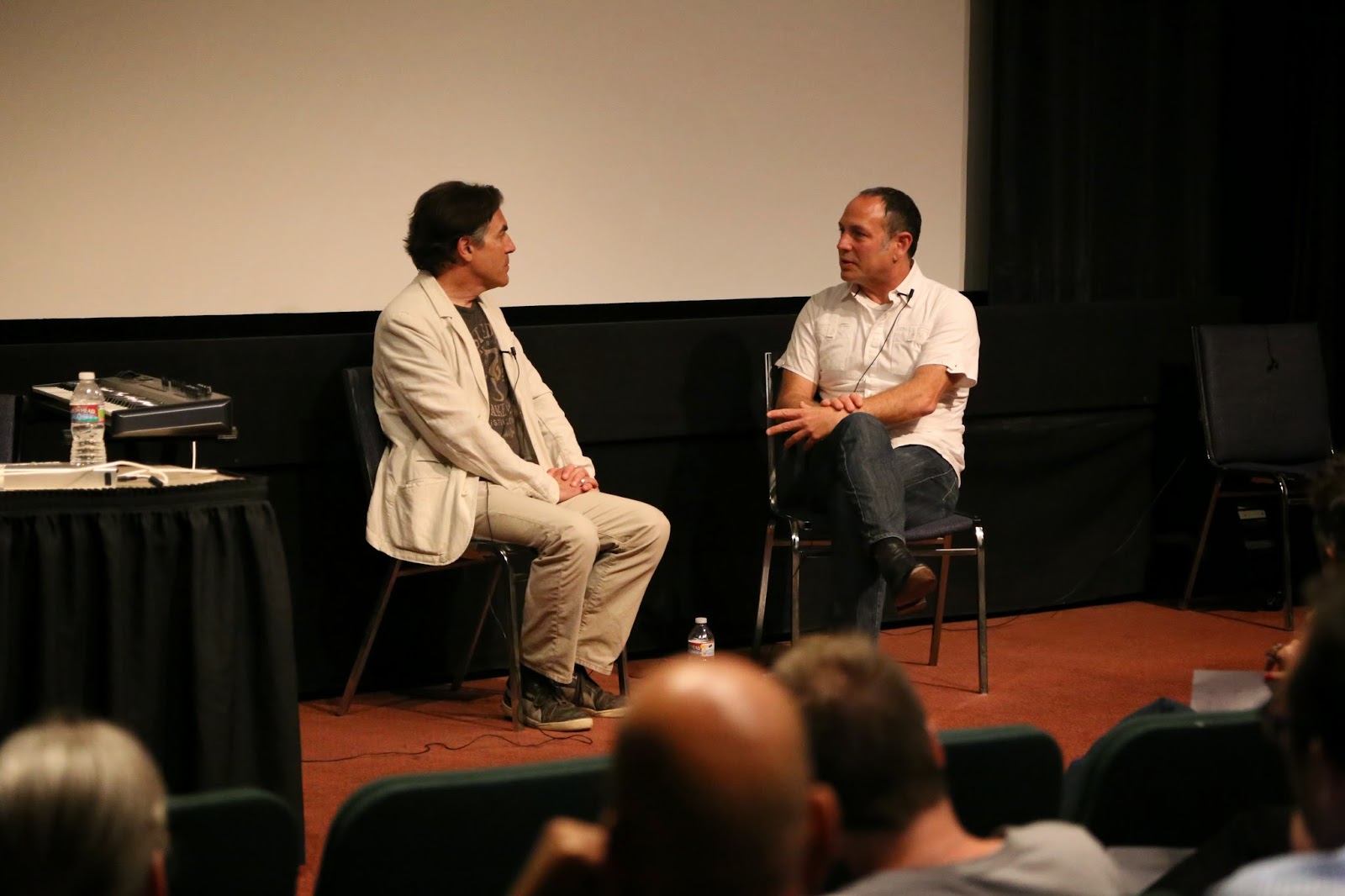 Posted by Craig Stuart Garfinkle at 7:13 PM No comments:

Have you experienced this problem when producing your layered vocal (string, brass, etc.) tracks?

You know you are going to layer back-ground vocals, three parts, two deep on a part, using only one singer.  A total of twelve tracks.

As an example, here's a screenshot of a session based on my "Stevie TV" song, "Sexy Mistake."  The scratch (muted) vocal is at the top.  The next twelve tracks are the proposed back-ground parts.  The bottom tracks are sub mixes of the instrumental tracks for recording. 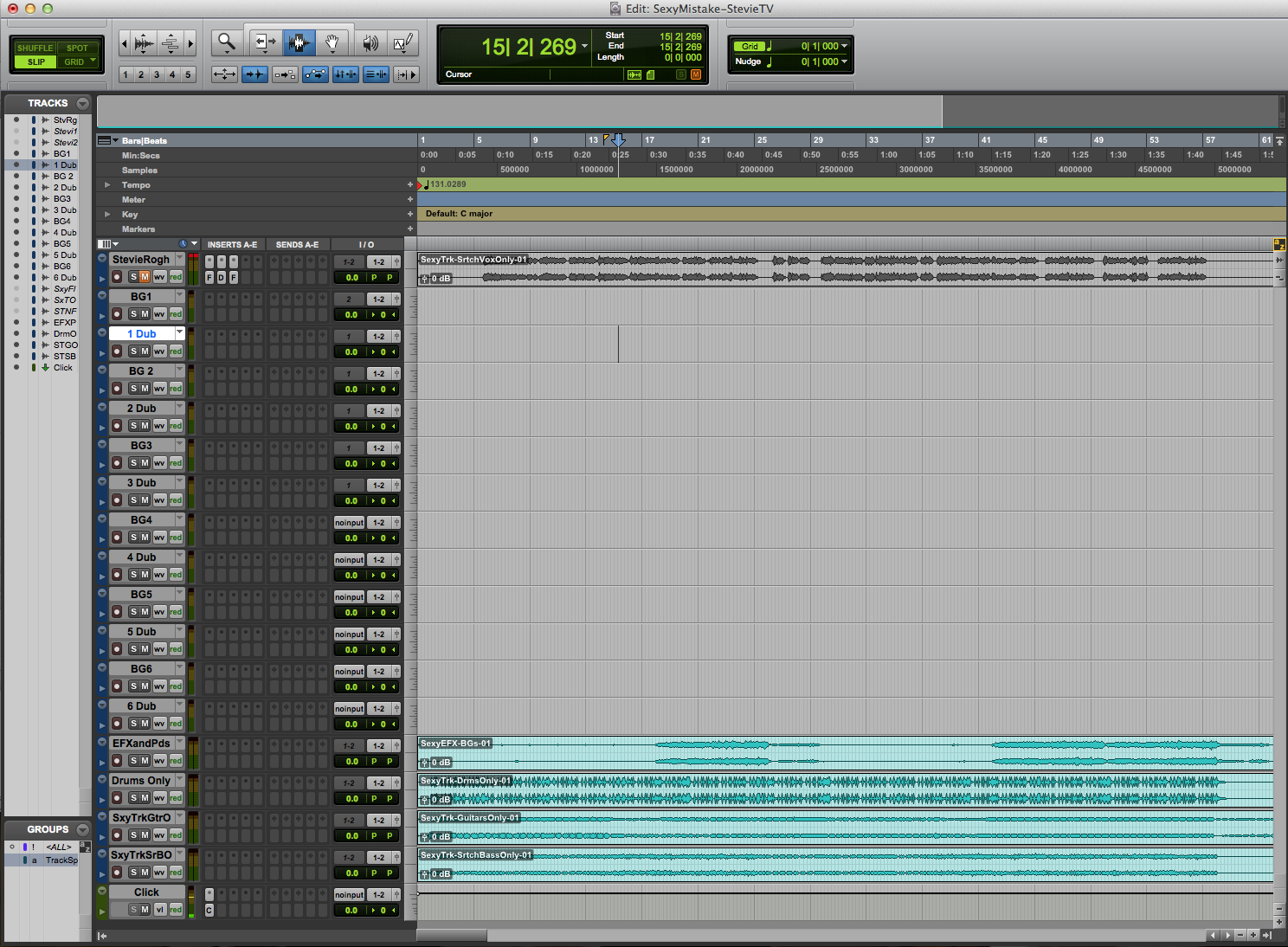 If you record the multiple vocal tracks as you would a solo vocal, and use a normal routing, when you balance the first back-ground vocal against the track, it sounds balanced; but as you add the additional vocals, unless you remix the vocals after you record each part, the back-ground vocals get too loud relative to everything else.  By the time there are twelve vocals, the singer (and you) can't hear what they are singing; nor the track.  They can't match or blend the vocals and the intonation goes to hell.

Likewise, if you record the first back-ground vocal where they might actually sit in the mix when all twelve vocals are layered, the first parts are too soft and you can't really judge the performance as you record them.

There is a simple solution to this problem that with just a bit of preplanning, works perfectly to keep everything in balance throughout the recording process without having to remix the vocals after every pass.

I don't know what the technical term might be, but I call it "gain matching."  It works as follows: 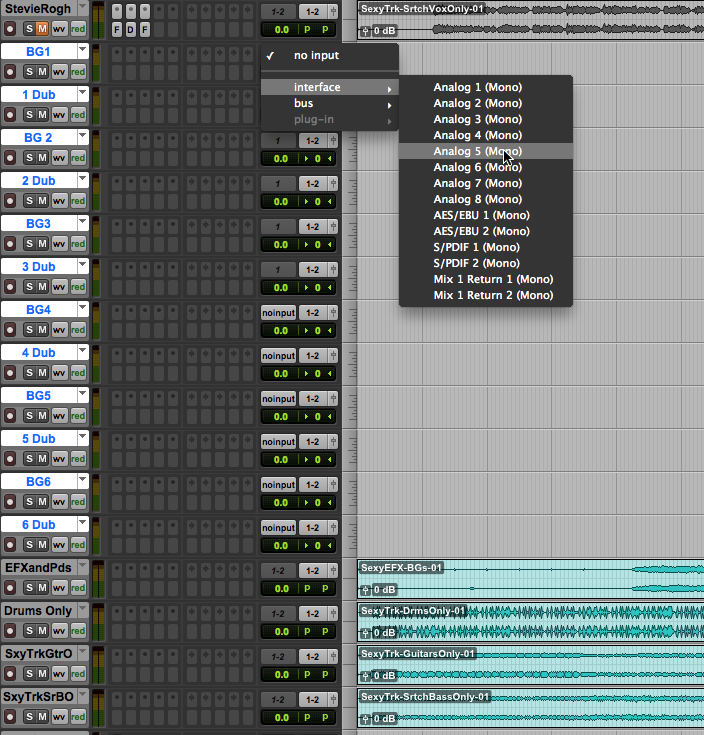 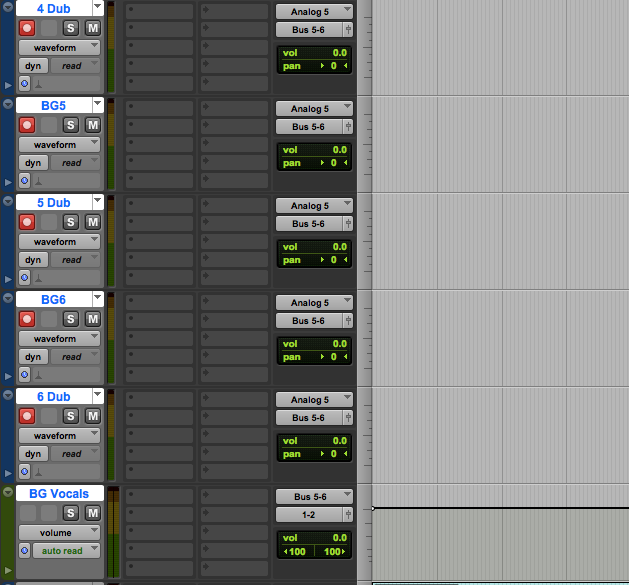 If hard disk space is an issue, and you don't want to physically record all the vocals as you go, you can use "input mode" for the vocal tracks instead of record mode - leaving only the actual track you want to record in record mode.

I prefer not to do this as I have plenty of disk space and it requires a few more key clicks along the way to keep everything balanced and a slightly more complicated routing (for another blog).

Posted by Craig Stuart Garfinkle at 11:15 AM No comments:

After countless requests, I finally got around to posting the score I created for the trailer to this iconic Woody Allen film.  Thanks to all who have reached out to me and prodded me to post it.

And of course, you can get the movie here:

Posted by Craig Stuart Garfinkle at 9:58 AM No comments:

The first video from my new personal passion project, creating music videos that highlight Malibu and it's beauty.

A big thank you to my friend Carlos Gauna for his photography!  Pure beauty!

More on the project as it develops...

Carlos uses the D5 and D7 series of Canon Cameras
Get your's here:

Posted by Craig Stuart Garfinkle at 3:59 PM No comments: