"Point of View” (POV) is one of the single most valuable elements music can add to a scene, and knowing exactly how to manipulate point of view is one of the film composer's most valuable tools.  Like a giant yellow highlighting pen, using POV, the music can lead the audience to empathize, despise, fear, love, laugh …  it’s all there at the composer’s direction.

Therefore, in this blog posting I will discuss the basic concept of  POV as it relates to music in film, it’s two basic “flavors,” and how as a composer, you can best utilize  “POV” to create authoritative underscore.

First, let’s introduce the two most basic flavors of musical POV.  They are:
First Person

One of the most exercised and obvious musical POV is “First Person.” This is when the music takes the POV of the character that we are actually watching on the screen.  Let’s take, as example, this brilliant scene from David Raksin’s classic score for the film “Laura.” 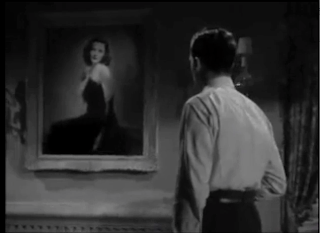 I was lucky enough to have David as a mentor and teacher.  I remember him saying in regards to this scene  (I am paraphrasing as the passage of time has modified his exact words).

That’s how I scored this scene:  The music is mirroring the hardened detective’s emotional journey as he first fights his growing infatuation with his subject, but then slowly falls in love with the portrait of the suspected murder victim. That’s where the music comes from in the scene.”

With this in mind, watch the scene again.   Knowing Raksin's  intention, we can easily identify how the music follows the character's every emotional ebb and flow.  Notice how, for example, when the character examines Laura’s personal belongings and the portrait, the meandering theme in the bass clarinet evolves into the main love theme as the detective's heart softens.

In hindsight, this technique seems obvious – but as David explains in his book “The Bad and the Beautiful,” at the time that he composed the music, the producer did not understand the role music would play in the scene and he had to fight to keep this pivotal moment in the movie.

Any time the music leads the drama, foreshadows impending doom, or makes the hairs stand on the back of your neck, chances are, it’s because the music is coming from an omniscient POV – the music is evidencing that it knows something we don’t.  It's telling us how we should feel about what we are watching.

As it is during the main title to the classic horror film, "The Shining," this arrangement by Wendy Carlos and Rachel Elkind of Hector Berlioz's Dies Irae music is letting us know that despite what we are watching, all is not well in the world - we need to be fearful.  The hairs are standing at complete attention on the back of the neck.  This type of execution of omniscient POV is very typical in a horror film.

OK - I am going to step outside the fourth wall for a moment.  I can do that - this is my blog.

While searching for the example of the main title from "The Shining," I came across the alternate version that follows:  "The Shining Opening Credits With Happier Music."  I found it to be yet another wonderful example of an omniscient POV in film music - and it made me crack up.

I now return you to our regular blog posting...

Here's an example of an omniscient POV, outside of the horror genre.  It's one of my favorite scenes from the classic Maurice Jarre score to the film, "Laurence of Arabia."

While you watch the scene, ask yourself, "Who's POV is this music?"  On the screen, we just see two guys riding camels across the desert.  Nothing is really happening; no epic dialog, nor an epic battle nor a great emotional reveal - but the music is absolutely as grand and stately as it could possibly be.  Why is it this way?

In this scene, using the POV of an omniscient force, the music is declaring the epic nature of the of the story, the vastness of the setting, and the grandeur of the character of Laurence.  Just as it was in the horror film, this omniscient force is saying, no matter what it is that you are watching, there are much greater forces at work.

We have already discussed both first person and omniscient POV as its two most basic forms.  Now let's see how they can work together.

For me, creating truly effective underscore for a scene means sculpting every note to the picture as it is being written.  It’s that grand difference between taking your favorite CD and dropping it against the image because it forms a pretty backdrop, and really dictating how every phrase, chord change, and cadence molds the audience’s experience of the film.

For this reason, the first question I always ask when approaching a scene is, “Who’s point of view should the music take in order to best present the plot and story?  And how and when should that perspective shift based on the action.

Here's a wonderful example from the film, "Life is Beautiful" (spoiler alert, if you have not seen the film, you should not read any further!).


In this scene, Nicola Piovani's score first takes the point of view of the little boy (1:54).  In the little boys mind, after working so hard to play the game well, he has won.  True to the promises of his father, his tank has been delivered - first prize.  It's a joyous moment!

Written in first person, the music, reminiscent of a triumphant circus march, is a heartbreaking juxtaposition to what we know as the audience;  The boy's father died saving his son from the horror of the concentration camp by creating the game.  This is a moment of supreme sadness worthy of Barber's "Adagio."

Then, at 2:53, just before the narration begins, the music shifts to the omniscient POV.  It's now reflecting the bitter sweet nature of our knowledge of how the child's experience has been colored by the passage of time.

The choice of silence as, "No Point of View."

Watch the scene once again.  Notice that almost two full minutes pass before the music begins.  Why is this so important?  The genius behind this silence is that for these two minutes, the music takes no point of view.   The audience, for that time, is left holding it's breath, not knowing how to feel;  Not knowing what is really going to happen.  If a note of music were played there, it would inform the audience too early.

And just at the moment that the tension could be pushed no further, the music releases it with the first hits of the snare drum.  And by that time, as the tension is released, the joy we hear in the music has become that much more tragic.

It's now 2015 and I just added this additional example of point of view to the blog.  Check it out:

Four Must Have Books for the Aspiring Composer.